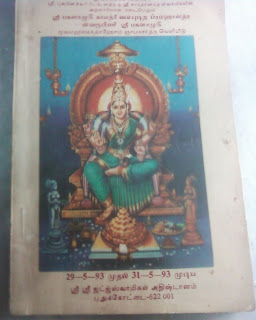 From the above book's passage, it is evidenced that Atharva Veda describes Sourashtra desam.  After her avatar, the violant waves of sea and violant air became calm and Infant Lord Hari got relief from fear and starts to play and laugh.  She was called as "Brammastra rupiNi "
Posted by R-Bhaskara Narayanan at 10:46 AM No comments: 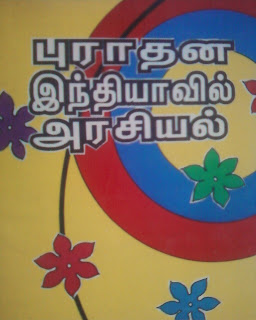 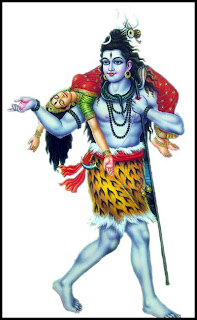 In Satya Yuga, Daksha performed a yagna with a desire of taking revenge on Lord Shiva. was angry because his daughter Sati had married Shiva against his wishes. Daksha invited all the deities to the yagna except for Shiva and Sati. The fact that she was not invited did not deter Sati from attending the yagna. But Sati, being an uninvited guest, was not given any respect. Furthermore, Daksha insulted Shiva. Sati was unable to bear her father’s insults toward her husband, so she committed suicide by jumping into the pyre. When Lord Shiva heard about her death he became furious. He went to the place where Daksha was performing his yagna and destroyed the area. Daksha was killed by Shiva’s ganas. Daksha


Lord Shiva then carried Sati’s body all over the world in a state of wild grief. At the request of all other gods, Lord Vishnu severed Sati’s body into 51 pieces with his Sudarshan Chakra, so that Lord Shiva could return to his sanity and once again take up his duties. Various parts of Sati’s body fell at different places which became known as Shakti Peethas. At all Shakti Peethas, the Goddess Shakti is accompanied by Lord Bhairava (a manifestation of Lord Shiva). 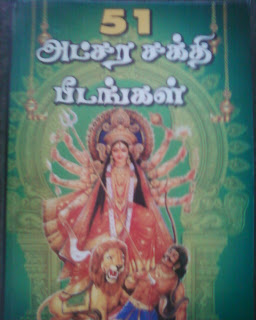 These Shakti Peetas are belongs to very old age and many shakti peetas forgotten or many shakti peetas in same name in various places.  On of the shakti peeta of Sati devi's thoracic body part fall at Somnath, Veraval, Saurashtra.  This is considered as the Eigth consonant letter / akshar of Sanskrit / sourashta language.  By order of Kanchi Kamakoti Sankaracharya Sri Chandrasekara saraswathi swami, a research made on 51 shakti peetas.  Finally, Vikatan prasuram (Ananda Vikatan weekly) the author Nagaraja wrote briefly of 51 akshar shakti peetas.

He wrote that " the Jaya @ Bhogada Devi peetam of Somnath, Sourashtra region is unforgettable by history ".  In the Somnath mandir premises, the Jaya Devi's Shakti peetam found.   The sanskrit book " Chitta Sabara tantram" narrats her idol as : 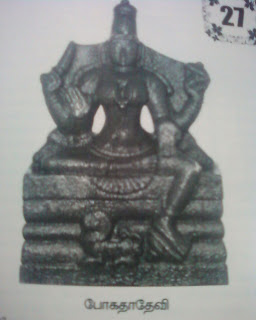 She is as red as blood, with three eyes, four hands.  She called in Saiva sect.  as ' Chaturana '  In Vaishnava sect. ' Sheeli '  In Saktha sect. ' Stirakala ' and in our body she placed Left Wrist and she born from victory, and called as Jayantha and Japa.  The book "Mathruka Nikandu" describes the above.

This peetam called as ' Mathureswarm' by Meru tantram book and other books called this peetams place as Prabhas Patan.

From this temple, if we move southwards, we can reach southpole.  No other land in south side from this temple.   This shakti called ' Chandrabhaha devi '.

In this sacred place Lord Krishna came with citizens of Dwaraka kingdom, to observe last days of their life.  Lord Krishna from here throw away his body and went His abode Vaikundam.  This place was called as ' Dehotsarg'.
Posted by R-Bhaskara Narayanan at 1:45 AM No comments:

Surya Siddhanta
A1000 Plus Year Old Hindu Text Book of Astronomy
A Description of the Solar Eclipse Calculation
Three different methods of calculation were in use in India at the time when Buddha lived, and they are still in use in different parts of the country. These methods are known as Sauramanam, Chandramanam and Barhaspatyamanam.
According to the Hindu works on Astronomy a Sauramanam year consists of 365 days, 15 ghadias and 31 vighadias; a Chandramanam year has 360 days, and a year on the basis of Barhaspatyamanam has 361 days and 11 ghadias nearly.


kRishNa, the hero of the yadus married jAMbavati, the daughter of the bear-king jAmbavAn. Their son was the valiant sAmba. He went to the banks of the river chandrabhAga and constructed temple in the honor of sUrya. No local brAhmaNa knew of the mysteries of his worship and hence could not take up priesthood at the temple. So sAMba sought help of gauramukha, the adviser of the yadu chief, ugrasena. gauramukha asked him to go to shakadvipa and obtain a special class of priests called magAchAryas to worship sUrya. saMba said:" pray, tell me Oh brAhmaNa what are the antecedents of these worshippers of the sun. gauramukha narrated: "The first of the brahmins amidst the shakhas was called sujihva. He founded a gotra termed the mihira gotra. He had a daughter of the name nikShubhA. sUrya was enamoured by her and impregnated her. Thus she gave birth to jarashabda who was the founding father of all the magachAryas. They are distinguished by the sacred girdle called the avyanga that they wear around their waist". saMba there upon called on kR^ishNa to send him garuDa and flying on his back he landed in shaka dvIpa. He collected the magAchAryas, brought them back to bhArata and installed them as priests of his sUrya temple.

The Idol of sUrya should be cosntructed thusly: He should have a human form with a solar corona placed behind him. He should be on a chariot with the horses standing for the seven solar rays. He should hold a discus and trident in two arms, and lotuses in the other two. His feet should be covered by boots upto the knees. His waist should bear the avyanga.

This temple on the chandrabhaga was situated in what is now the terrorist state of Pakistan and was demolished by Awrangzeb in the 1600s.

There is considerable epigraphic evidence for the prevalance of the saura sect in India and definitely the cult was very popular at the time shankara bhagavatpAda formalized the six sects of sectarian Hinduism [shaiva, shakta, vaiShNava, gANapatya, kaumAra, saura]. The earliest pieces of evidence clearly support the Iranian connection. The coins of the kushaNas have an image of sUrya with the inscription miiro. The GovindpUr inscription from the 1130s speaks of the magas as being brought to the land by sAmba and 6 great poets who were magAcharyas are mentioned. Mihira Kula, the Hephalite ruler sponsored the construction of another sUrya temple in Gwalior. This suggests that the Iranian influences on the saura sect were continous and over a long period of time. In Rajasthan and Northern Gujarat there were a number of sUrya temples including the well known one at moDherA. These contain idols of suryA with the boots up to the knees clearly implying the Iranian connection. Most of these temples were destroyed in the fine vandalistic traditions of the zealots of Allah. Priests with the sirname maga are seen around the sun-temple in Osian in Rajasthan suggesting that it was probably a famous center of the Iranian sun cults. So it is clear that original home of the magas was indeed in the west and following the devastations of the al-Qaramitah and the Ghaznavids their remnants fled to the east and are now found there. Today the remnants of the magachAryas are the shakadvipI brAhmaNas who are still present in Uttar Pradesh. While they are not accorded the same status as the Arya brAhmaNas, they still observe basic brahminical rites, such upanayanaM and shaucha rules.

Analysis of the names of the queens of the Karkota dynasty of Kashmir shows that there were Iranians amidst them. They seem to have reinforced the saura cult in kAshmIr as evidenced by the mArtANDa temple in kashmir and a kashmirian idol of lalitAditya's time with the classic Iranian dress.

However, it should be noted that the Sun cult also existed in Southern India. In Thanjavur there is the Suryanar temple with absolutely no Iranian influence in the iconography. This suggests that while the idea itself spread widely across India, the priest did not physically move into these regions. I have heard that the sUrya temple in a hill temple complex built in Pune by the Peshwas was also consecrated by maga priests as late as 1750AD however, it is iconographically intermediate between the northern and southern forms. Finally, the sauras also tried to provide a "vedic tinge" for the sect via the composition of the sUryopaniShat and the appropriation of the savitA gAyatrI. 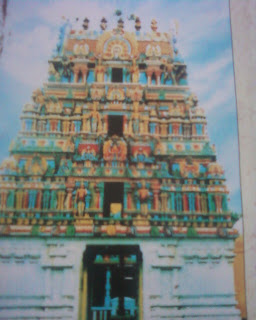 The visible imprints of the saura mata that persist today are: 1) The highly popular Aditya hR^idayaM, which is attributed to agastya and has been inserted into the yuddha kANDa of the rAmAyaNa. This hymn appears to be an early composition of the saura school. 2) The second great saura contribution is the sUrya namaskAra vidhi which is a yogic/tantric practice derived from the saura tantras. 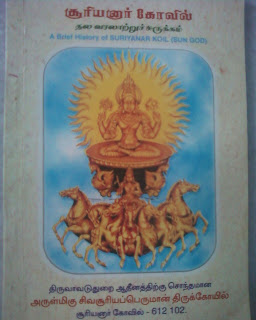 Emergency rule of 1975-77 declared by Ex. Prime Minister Indra Gandi after judgment of Allahabad High Court disqualifies her Parlimentary Membership (MP).  This judgement came after Mr. Raj Narayan filed a case against her, and accused her that ' she bribed voters and spend lakhs of money on election to win '.   She does not agreed this judgment and moved to Suprement Court.  Meanwhile she made changes in Election laws to survive her Government.  After that, Publishing medias, News papers forced NOT to publish opposition political partie's news,  and strictly censored.  Opposition leaders treated badly.  Many of them jailed like JP @ Jayaprakash Narayan, Morarji Desai.

A national all political party movement formed to face emergency rule.  Rashtriya Swayam Sevak Sang and Jana Sang and other political parties strongly condemned this injustice rule.   Many Sourashtra community people participated against 'Emergency rule ' and it is called as " The second freedome movement". 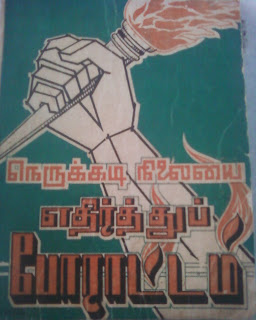 The Participants of sourashtra people by chronicle order of Sathyagrahi agitation details :

The Sathyagrahi against Emergency rule of Indira Congress Govt, On 20-11-1975 at Paramakudi, M.N.Subbaraman leaded a agitation and demanding freedom.  On 27-11-1975 at Salem P.S. Jawaharlal leaded a Sathyagrah.

A interesting incident remembered by some elders.  " The period when emergency rule declared, even a distribution of  a bit notice of opposition parties are also a crime !! So we cant stock this notices-publications neither in hand nor  in our home.  We hide and  kept these notice-publishings under a step of a house which used to pass a ditch !

Kullan. Kuppier, and Putta. Vittal of Salem was arrested and tourchered.  They drove away in Yercaud forest by the police as nakedly..."

Finally democracy established.  Brutal punishment on opposition leaders and supporters came to an end.  A drama of Indira Gandi to survive on power came to an end.

Posted by R-Bhaskara Narayanan at 3:41 AM No comments: 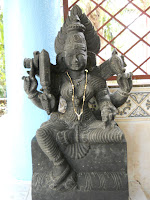 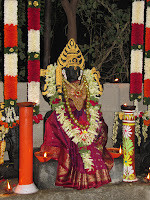