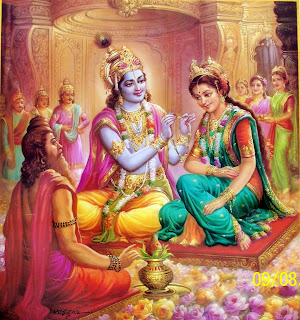 Once upon a time there was a Viderbha king named Bhishamka, whose capital was Kundinpur. He and his loving wife Shudhamati had five mighty sons. They always longed for a daughter. Shudhamti, who was a great devotee of goddess Amba-Bhawani prayed and begged before the deity to bless her with a pretty and talented daughter. The deity pitied her. Soon Shudhamati was blessed with prettiest daughter, on the 12’Th of Baisakh (May). Shudhamati looked after Rukmini with a great care. She had mastered Rukmini, not only in arts and music but also educated her in the martial skills like her brothers.
Rukmini grew up into a fine lady and started receiving proposals from various princes but she didn’t approve of any. So Shudhamati was very worried about her marriage.
On one fine day a priest and a match-maker named Kiritiman, visited Shudhamati. He was just back from Dwaraka and was highly impressed by the kindness of Dwarakadhish (Lord of Dwaraka) . His eyes were bewildered, after viewing the wealth and the grandeur of Dwaraka. He was treated with love and respect by the citizens over there.  Dwarakadhish lord , personally had treated him regally. He then described whole-heartedly, in details about the wealth of the glorious Dwaraka. He later narrated all about the charismatic personality and the nobleness, of the powerful Yadva ruler , to Shudhamati. Then Shudhamati had vowed herself to marry off her daughter Rukmini to Dwarakadhish. The lucid description of Dwaraka and lord  had not only created a good impact on Shudhamati’s mind but also had impressed her daughter Rukmini very well.  Kiritiman then gifted a painting of Lord Krishna to Rukmini and Rukmini had immediatly fell in love with the image of lord . She tactfully conveyed her approval to her mother. Then both of them succeeded in getting Bhishmaka’s consent.
Rukmi, Rukmini’s, cunning, evil-minded and aggressive eldest brother had always criticized. He opposed this marriage strongly. He declared to marry off his sister to Chedi King Shishupal, who was a vessel of the  King Jarasandha. Rukmi had very selfish political motives behind this declaration. To suppress the opposition from his parents, he sent a messenger to Pragjyotishpur and requested King Jarasandha to help him. Bhishmaka then was threatened by King Jarasandha that, Kundinpur will be soon besieged if the king doesn’t agree with Rukmi and marry off his daughter Rukmini to Shishupal. The King Bhishmaka was helpless and soon the invitations of Rukmini’s wedding with Shishupala were sent to everyone.
The surpassingly beautiful Princess Rukmini was scared and worried. She gradually sank into the depression. She’d stopped eating properly or taking care of herself. One day while worshipping and praying to Amba-Bhawani, she got a brilliant idea. She immediately dipped her finger in the “Ashtagandha” or the holy paste of sandal-wood mixed well with saffron and other herbs. She wrote a valentine on a lotus petal with finger dipped in Ashtagandha. She wrote….
You dignified eternal charmer… unconditional lover…your glimpse soothes injured mind… can’t think of living without you…. .Please do accept my proposal… arrive on the eve of my wedding…early in the morning at the  take me away to Dwaraka ….
She then handed this valentine to Sudeva Bhatt; her most trusted Brahmin messenger. Sudeva speedily rode to Dwaraka, with the letter well hidden in his head-gear. He narrated the story to Dwarakadhish Lord Krishna and handed over the valentine. Lord Krishna kissed her valentine and then replied “The truest wishes expressed from the bottom of the heart are always fulfilled.” This message was soon conveyed to her. Then her disturbed mind was calmed.
It was an eve before the wedding. Rukmini’s body was smeared with the paste of sandalwood and turmeric. The ritual bath with the perfumed water, mixed with the rose-petals was given to Rukmini by her maids. Then she was heavily decked. She overcame all the oppositions and dodged all the securities provided by her mean-minded brother Rukmi and headed towards the Amba-Bhavani’s temple, for the pre-wedding worships
All the invitees had then arrived in Kundinapur and were welcomed warmly by Bhishmaka; amongst them were Yadava kings Balram, Satwik, Gad along with their selected henchmen. Rukmini’s brothers; especially Rukmi was very disturbed to see them but couldn’t do anything as they were honorable guests. Rukmi was relieved, when he noticed that  was absent.
In the temple while worshipping, a huge garland of red flowers that had adorned goddess Amba-Bhawani’s statue fell on the right side, into the delicate hands of Rukmini. Rukmini then was very delighted, as this was certainly considered as a good omen. She kept that garland carefully in her platter.
After finishing her prayers as Rukmini came out of the temple, she was overjoyed to see her lord waiting for her, outside the temple in his chariot. She shyly went ahead. She took that garland from her platter and adorned ’s neck with it. Then lord  immediately adorned Rukmini with the garland of Basil leaves which he was wearing. Hence the prime ritual of the wedding; exchanging the garlands was performed. Both of them, then headed speedily towards Prabhas, where the wedding preparations were already made.
Infuriated Rukmi and his men then attacked upon Yadvas. They fought very fiercely. Eventually Rukmi was defeated and arrested. His head was shaven off and vermillion was smeared on his head.
After finishing the wedding rituals at Prabhas, lord  and his newly-wed wife Rukmini went to Dwaraka. Their wedding was celebrated very pompously at Dwarka.
Posted by R-Bhaskara Narayanan at 7:07 PM No comments: 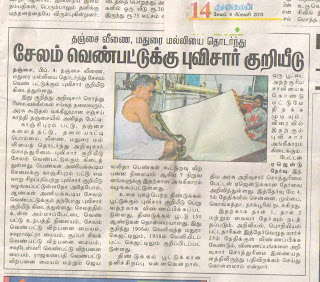 Salem Sourashtrians Special Variety in handloom is White-silk dhoti.  (VeN pattu Veshti).  Some five Co-operative society and its weaver members are producing this handloom variety.  Already Salem is famous for Mango .  The famous Tamil Poem " Selathu mambazalam thithikkum mambazlam " is familier around the country.  Now the "White-Silk Dhoti" also belongs Identity of Salem.  This Geographical Identification is given by Government of India under GI rules.  Handloom weavers expecting a Sales boom after Govt's announcement if GI of Salem is " VeNpattu Veshti".
Posted by R-Bhaskara Narayanan at 8:30 AM No comments: