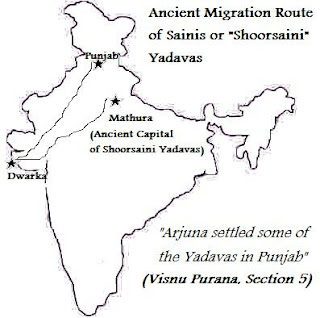 Hundreds of years ago, in Birnagar lived Kamala and her son. She was not his real mother, but she had brought him up as her own son and given him good education. She had been the chief maid to Queen Pushpavati of Vallabhi, in present-day Saurashtra in Gujarat.
King Siladitya came from the great Surya dynasty. He ruled his kingdom well. He endeared himself to his subjects with his nobility and justice. Peace prevailed in the kingdom and the people enjoyed prosperity.
It was the time when the Tartars had invaded India. Their aim was only to plunder and loot. Soon, they were knocking at Vallabhi. Siladitya had a powerful army and would have easily defeated the marauders. The Tartars also knew that they would meet with stiff challenge from Siladitya. So, they played mischief. They bribed some of his ministers and, with their help, they made a pact with his commander-in-chief as well. They now waited for an opportunity.
That came when a son was born to Queen Pushpavati and the gates were thrown open for the people to come in and greet the prince. At the same time the Tartars decided to attack Vallabhi. King Siladitya found that his commander had deserted him. He mustered some soldiers and gave battle to the Tartars who outnumbered the forces of Siladitya.
King Siladitya was killed in the battle. When the news of his death reached the palace, Queen Pushpavati decided to escape with her son. Her maid Kamala and a few attendants accompanied her. At the outskirts of the city, the attendants were reluctant to proceed further and they went back to the city, leaving the queen and the newborn prince to their fate. But Kamala was loyal and she guided the queen to a temple where they stayed for the night. When morning came, they found a cave and took shelter there.
The long walk, without any food or drink, had exhausted the queen. She fell ill, but Kamala was helpless. In her presence the queen breathed her last, leaving the baby to her care. Kamala decided that she would bring up the prince as well as she could. After a long and tiresome journey, she managed to reach Birnagar where her own parents lived. They began calling the prince Goh.
Now Birnagar bordered where the Bhils had a territory for themselves. Their chieftain was Mandalik. As Siladitya had waived payment of tribute or taxes by the tribals, they had great respect for him. Following his death at the hands of the Tartars, Mandalik declared independence and continued as the ruler of the Bhils.
The young Goh made friends with the Bhil boys who taught him the use of the bow and arrow and initiated him into hunting. One day, Goh and his friends went a-hunting and soon found themselves in a thick jungle. Suddenly, a wild boar attacked the boys. They had only their bows and arrows with them. Goh threw away his bow and arrows and wrestled with the boar. The Bhil boys could now aim arrows at the animal which soon lay dead.
hey carried Goh on their shoulders and presented him before their chieftain. Mandalik listened to their narration and was told how Goh had taken on the wild boar single handed. The boys were all praise for Goh, for he had saved them from being killed by the boar.
Mandalik was meeting Goh for the first time. So, he queried, “What’s your name, my young friend?”
“I’m Goh,” replied the prince simply. “Who are your parents?” asked the chieftain. Before Goh could reply, his Bhil friends said, “He’s a brahmin boy living in Birnagar. We’re friends. He plays with us and goes hunting with us, too.”
“You, a brahmin boy, could wrestle with a wild boar? It’s unbelievable!”
Goh smiled and suddenly felt shy. He raised his hand to cover his face. It was then that Mandalik noticed the amulet Goh was wearing on his arm. “Would you take off your amulet and show it to me?”
It was a practice in those days to tie newborn infants with an amulet which would contain details of himself and his parentage. During the birthday celebrations, Queen Pushpavati had tied an amulet on the young prince, and it had always remained on his arm. Goh appeared reluctant to take it off his person. “I’ve worn it ever since my birth and I don’t know whether I’m supposed to remove it at any time.”
“I merely want to examine it and it will again be tied,” assured Mandalik. He signalled to the Bhil boys and they now removed the amulet.
Mandalik opened the amulet and read the inscription inside. Suddenly, he jumped out of his stone throne and embraced Goh. “You’re the son of King Siladitya who was a good friend of the Bhils.” He called out to the tribesmen and women, who gathered in their hundreds. “He’s the son of our friend King Siladitya, who was killed by the evil Tartars. Prince Goh should be crowned.”
Meanwhile, some of the Bhil boys had gone to Birnagar to convey the glad news to Goh’s mother. Kamala and her father rushed to meet Goh whom they saw seated on the stone throne surrounded by chieftain Mandalik and Bhil men and women. Kamala shed tears of joy and described how Queen Pushpavati had escaped from Vallabhi with her infant son at the dead of night.
Now Mandalik and his men had no doubt about the idenitity of Goh. But he declared that he had no intention to go back to Vallabhi and would like to remain with his Bhil friends. At Mandalik’s instance, the coronation of Goh as the King of the Bhils was performed in a grand way. Later, Goh founded a dynasty called Gehlots, who at one time ruled over a large part of northwestern India.
Story Source :  http://www.chandamama.com/story/2/6/111/1575/1/the_bhils_get_a_king/stories.htm
Posted by R-Bhaskara Narayanan at 10:13 AM No comments: 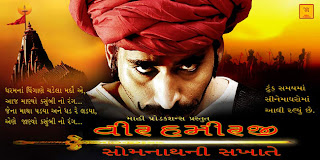 Inspired by literary compositions of Great poet Sri Zaverchand Meghani, Kalapi, Sri Jaymal Parmar and Deepak Vyas, written by Sri Deven Shah and directed by Nilesh Mohite, "Veer Hamirji"the movie is based on historical story of great warrior ' Hamirji Gohil ' who fought and sacrifices his life to save the great 'Somnath Temple'. Hamirji Gohil is a legend amongst Rajputs and Gohil samaj of Saurashtra ( like Shivaji in Maharashtra). There is a monument to his memory in front of the temple of Somanath in Veraval, Saurashtra, Gujarat.
Flavors of movie:

- Major part of the actors are from performing arts and all important roles are played by well-known famous actors of the Industry ie. Mrs Sonya shah, Mr.Pramthesh Mehta, Mr. Cetan Doshi,

- This will be the first international movie that will be released first in Guajarati.

Music is the key strength of this movie, we have developed good situational and melodious songs.

We obtained permission to use ‘Kasumbi no rang’ Well-known folk song written by National poet Mr. Zaverchand Meghani. This song is never used as a film song till now and it’s very much popular in Gujarat. This song is sung by Mr. Kirtidan Gadhvi who is famous folk singer of Gujarat.

The Main attractions are ...