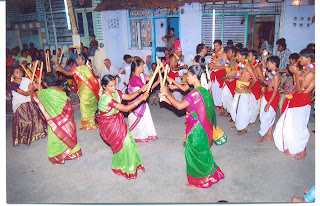 For the past few hundreds of year from migration (1400 years before) from Saurashtra, we celebrate Rama-navami and Krishna Jayanthi (Janmashtami) traditionally without gap. Usually Rama navami celebrated ten days and Krishna jayanthi takes one day. The folk-dance in humor form has performed entire Ramayana on the ten-day celebration. Now a days particularly for the past 30 years the celebration comes nearly an end in Tamil Nadu sourashtrians. No folk singers remaining. Now in Salem only one folk-singer is remaining. No folk dancers! To preserve and save the tradition, an organisation and folk group created by G.R. Paneer selvam. The organisation called SALEM SAURASHTRA SRI KRISHNA BRINDAVANA KOLATTA KALAI KUZU. Stated at 1989.

The folk group now in Male and female group as its part.

They also conducted one Sourashtra language play and patti manram. 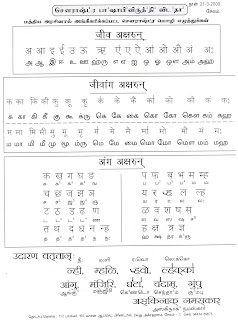 We the migrants from Sourashtra who are settled in Tamil Nadu. At the time of migration (Approx.ly 1200 years before) first settlement at Salem and sorrounding places. After that, Tanjure settlement then Madurai. On those days, we are Traditional weavers, and treated as 'sutras' category. Only the Brahmin community having knowledge of script and treated as Pandit's, Guru's Prohits. We sousrashtrians though Ex-brahmins, we have food habbit of meat as well as Brahminical identity as wearing Holy -thread on body (jenjam)
Because of our communication gap with mother-land we forgot many things like our traditional sou.dress and marriage sampradayams. We today follow south Indian sampradayams. The only thing remaining to bind with our mother land is our language. We preserved our language wel as in sanskrit tradition. While in 1960 the STATE OF SOURASHTRA divided into states (Maharashtra and Gujarat) in the name of Sourashtra language's two dialects emerges as invidual languages. We the migrants did'nt had any impact of these dividion on our language because we are far-away from mother land and without any and nil communication with our motherland. So today our Sourashtra is in the similar state like sanskrit in some ways. So we became very minority language today. Recently CIIL guided us as our script is Deva-nagari script. We are now communicated with this script with our mother-land people also. Though our language is older than sanskrit, our script also be the older one. NOT some hundred years old one, and logically not suitabe to our language. ( I mention Ramarai's script).
I had a post-card, a rare collection, which was posted from our mother land sourashtra. That post card written in Deva-nagar script. ( not on ramarai script) It was atleast 200-400 years old. and having Sign of " SAURASHTRA POSTATE" instead " India Postage". That post-card alone tell many history.
For reference, see the Deva-nagari script on pic which was guided to suit Our mother tongue Sourashtri. It was guided by CIIL.
Posted by R-Bhaskara Narayanan at 6:31 AM 1 comment: